On-Street Parking in the winter

On street parking in the winter is not nice. It's not nice for the poor Mr. SnowPlowMan who has to clear the treet but the snow pile zone is full of parked cars. Nor it is fun for the drivers who get their cars blocked by the snowpiles, and have to scrape the windows clean and shovel the snow off the roof. And then they have to try starting the car without the benefit of electric heating, causing extra wear and tear in the engines if it's cold. And create clouds of pollution from the cold-start. 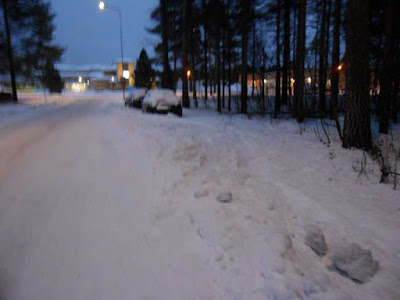 Meanwhile, bike parking on the bikeway is not really a thing. First, one can usually park the bike easily in the racks near just a few meters from the front door (if indoor parking is not available/rider too lazy) so why would anyone leave their bike on a bikeway? That'd also mean they walked away, and that's not something we like to discuss here in Very Northern Cycling Blog. Bikes were invented to stop people from walking, you know!

And there's the danger of snow camouflage. What happens is the bike fell over and then it snowed a lot and Mr SnowPlowMan does not notice there's a bike? Well, he plows it away!  I think most of the worst ones will get sent straight to the recycling, but many mangled ruins of a bicycle gets sold every time there's a "Lost&Found" sale.

Still, short term parking does happen. Met a friend on a walk, flat tires, the chain came off, it was colder/more slippery than you thought so one has to walk instead, or too much alcohol. In the autumn picking berries and mushrooms are good reasons to stop, but usually one should carry the bike 100 meters into the bushes to leave no clue for others to find your good berry bushes. Maybe the dog got an interesting scent and dragged the rider off to the woods?

Posted by timooohz at 11:22 No comments:

Here's what the bikeway conditions have looked like during the last two weeks: 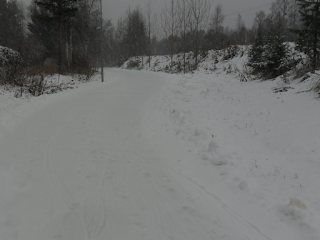 Snow, nice winter temperatures of maybe -10C. There was enough snow for the plowers to plow and get some piles on the sides. And kids were already sledding, of course. 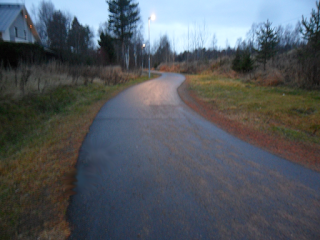 Then it rained water, eww! with the temperatures a little above freezing with some black ice thrown in to make cycling and walking more interesting. Same spot as above, I couldn't be bothered to cut this picture to exactly same view. 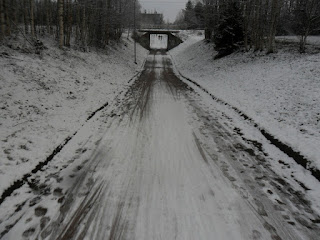 And then it got a little colder and snowed a little. So far this snow hasn't melted away yet. The rivers and the sea has not frozen yet, and I think even small lakes do not have enough ice for kids to skate on safely. Maybe there's enough some ice fishers! :-)

Posted by timooohz at 11:20 No comments:

Email ThisBlogThis!Share to TwitterShare to FacebookShare to Pinterest
Labels: weather

Not quite snow yet

We did get some sleet and maybe even some flakes of snow. First drop was in the morning, and it snowed enough to get the ground white. The snow didn't survive the day and melted away.

In the afternoon it snowed/sleeted again. The ground was wet and warm enough that the sleet melted away pretty soon but the rooftops of garages and other unwarmed buildings kept the white cover.

The weather forecast promises below freezing nights (-6C today) and above freezing (+2C tomorrow) days so this snow will be gone tomorrow. No rain expected but I'm not sure how soon the roads will dry. Expect black ice on the mornings. My mom already volunteered me to change the winter tyres on her car. :-)
Posted by timooohz at 19:53 No comments:

We got a cloudy day, with some drizzle and mist. Very english weather. (I've never visited the UK. I've just heard it rains there all the time. And fog. :-) The trees have been covered in white frost and postcard scenes were everywhere. Now it warmed above freezing and the trees have lost the shine. Bikeways are a bit sloshy and will need the gritting once the heat wave passes. 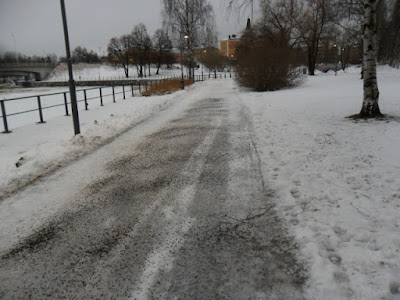 Ice fishers do not like this weather either, as there is water on top of the ice, too. That makes harder to see if there are any holes in the ice. And it also makes walking on the ice extra exciting. :^) 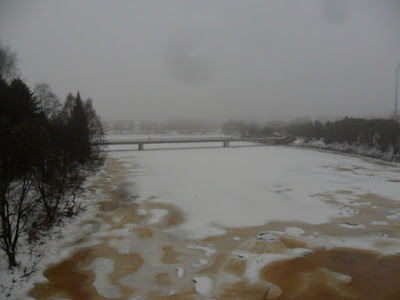 I tried to get some of the fog in the picture... there are some high buildings behind the cars but they are not visible... so I guess I got the fog. Here we are salmoning safely on the bikeway. I hope the plowers find time to remove the slosh pile on the left before it freezes solid. Although with their 10 ton wheel loaders they'll be able to crack it even if freezes. The railings might get damaged in the process, though. 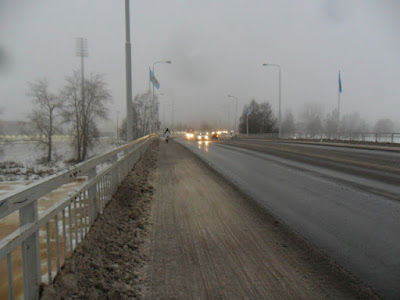 Posted by timooohz at 21:08 No comments:

Email ThisBlogThis!Share to TwitterShare to FacebookShare to Pinterest
Labels: weather 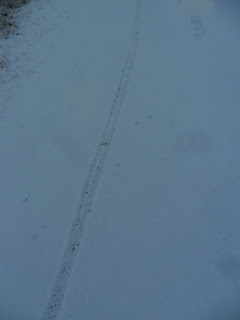 Today I saw the "First Snow" of the winter. The meteorological office rules say a minimum of 1 cm of snow to qualify as "official" first snow and we had that. On centimeter is not a lot, but enough for the kids to get out the sleds! Although they noticed they didn't slide very well, the gravel beneath was not slippery. :-)

And it's enough for bikes to leave tracks. I was the first here!
Posted by timooohz at 21:37 No comments:

Despite hits by a lightning, truck, space debris and attacks of bears and ducks, and bouts of brain tumors and heart attacks and decapitation, I'm still alive. Sorry, but I've been busy and lazy so I haven't posted anything.

I did some videos during the summer, but by now the videos are several months old so there's no point in posting them. Browsing the folders, I did find one that was not too outdated. (Last I saw they had dug up the underpass.) 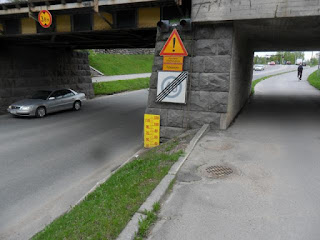 That's a bunch of signs. Maximum vehicle height 3.8 meters, "Other Danger" sign with the plaques below telling what the danger is: "limited height" and "flooding". The 40km/h area limit ends here.

But the water depth meter is something new!

It's there to give drivers a way to see how deep the water is, so they do not have to find out the hard way. This underpass has drainage problems and gets flooded after heavy rains. Sometimes the drivers find out their car is not amphibious. But they're fixing the drainage problems by digging up the underpass. But how will drivers get to the other side of the railway tracks? Ooh, Carmageddon! :-)
Posted by timooohz at 10:00 No comments:

Email ThisBlogThis!Share to TwitterShare to FacebookShare to Pinterest
Labels: construction

Last week I was driving along a rural road. I couldn't drive very fast, as the conditions were not very good.

(Here should be a photo, but the upload does not work. Use your imagination.) Edit: it worked today! :-) 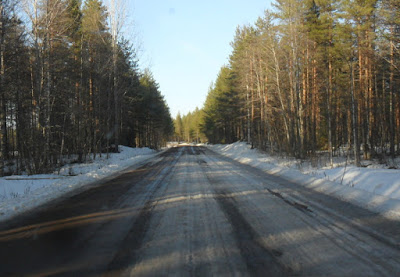 Parts of the road were covered with ice, with nice four inch ruts zigzagging on the ice. On some spots the plowman had done a closer shave, and the sun had melted the ice away and revealed the soggy gravel road. The soggy gravel works like wet sand, it is soft and can drag the car to the side.

Here I am, with the car sliding a meter to the left and right on the ruts and the quicksand pits, enjoying the improved conditions on the road. Because the Summer is coming: snow is melting fast. The fields are mostly snow free, the forests still have some. Rivers will flood and the ice will float downriver this weekend.

A few days earlier, the ice on the road was a few inches thicker. Which meant that the ruts on the ice were six, even eight inches on some spots. If there had been no plowing, this road would not be driveable for a few weeks.

Posted by timooohz at 21:44 No comments: